Revenues grew by 215% year-to-year and by 47% quarter-to-quarter. “We achieved our greatest quarter-to-quarter revenue growth to date, thanks to wide diversity in customers and to strong contributions from the cell-phone, digitalcamera, and video-game markets,” said Shaw Hong, president and chief executive officer.

During the quarter ended October 31, 2003, direct sales to original equipment manufacturers and value-added resellers accounted for approximately 71% of revenues, with the balance of approximately 29% coming through the Company’s distributors.

For the quarter ending January 31, 2004, the Company currently expects to report earnings of $0.40 to $0.42 per diluted share of on revenues of $74 million to $78 million; these expectations do not presume the sale of any previously written off inventory.

At 1:30 p.m. PST (4:30 p.m. EST) today, November 19, 2003, the Company will hold a teleconference to discuss the financial results and future plans and prospects. To participate in the teleconference, please call (toll free) 877-523-2171 approximately 10 minutes prior to the start time. For international callers, the dial-in number is 706-634-1478. One may also listen live via the Internet at the Company’s Website, www.ovt.com, or at www.FullDisclosure.com. 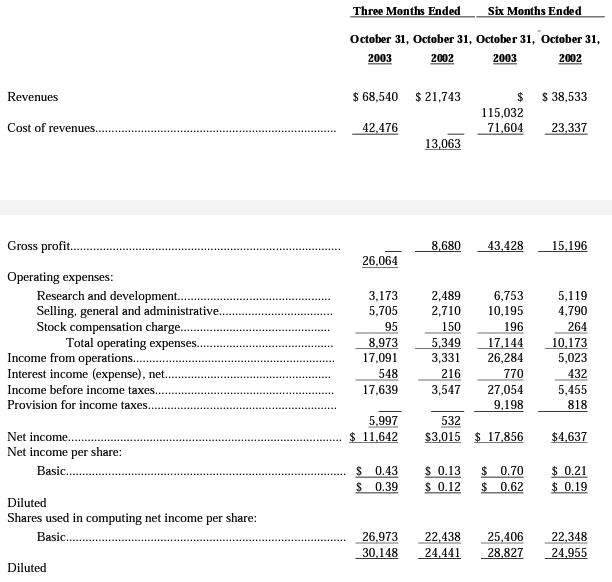